You are using an outdated version of Microsoft's Internet Explorer web browser, which does not display modern web sites properly (including this one). To ensure you always see sites at their best and your browser security is up to date, it is highly recommended that you upgrade to a modern browser.

The TriTech boom range is designed for operators who demand the utmost performance, reliability, and control. Time and time again the TriTech boom has been named “No.1 for boom stability”* which at the end of the day, results in a superior spray result.

Features such as hydraulic yaw which precisely controls the forwards and backward movement of the boom wings to minimise the under and over applying of chemical is now standard on all widths.

The strategically placed centre section suspension links help isolate the sprayer chassis movement over rough terrain. Combined with the tuned damping characteristics allows precise roll control enabling an optimal and consistent nozzle height to be maintained, even without the use of electronic height control systems.**

All TriTech booms are constructed using lightweight trussing techniques, which allows for a stronger design without weight, the enemy of boom agility. 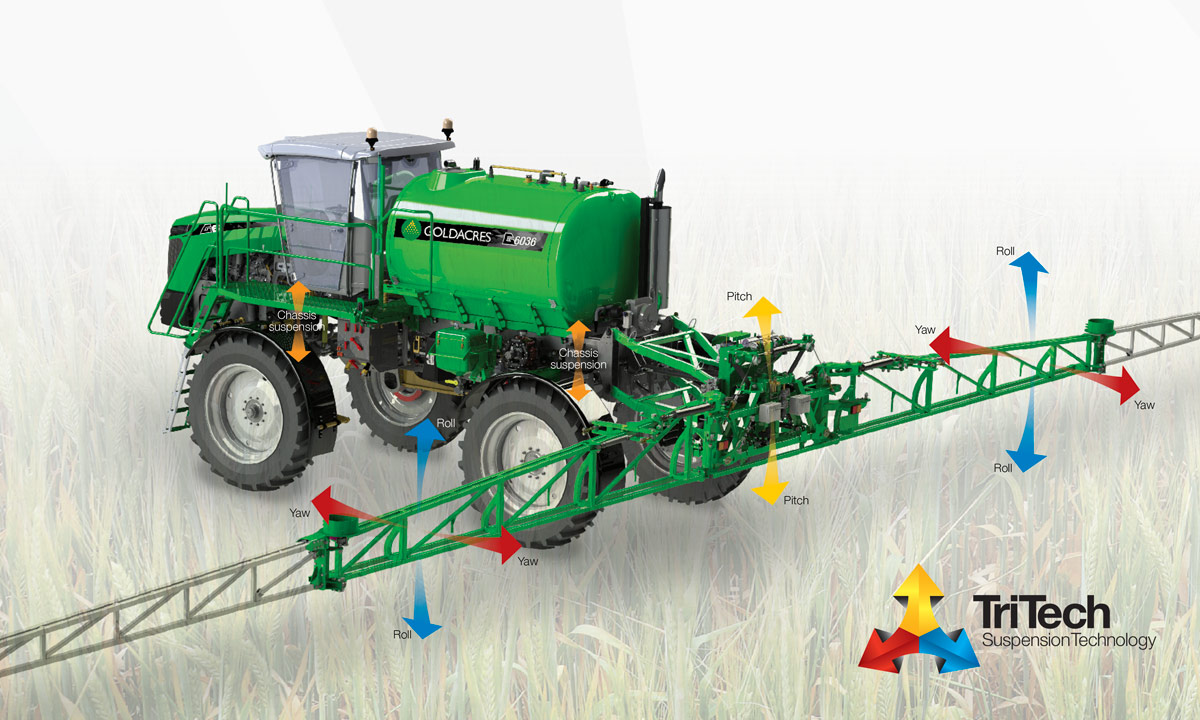 Why is boom ride and stability so important?

A boom which bounces, sways or yaws deposits chemical unevenly on the target. This can result in weed escapes and may even contribute to resistant weeds.

The Goldacres TriTech suspension system has been developed to provide you with the best boom ride possible and assist in an accurate application. Working in conjunction with the chassis airbags the boom features three-way suspension that works to reduce boom pitch, roll, and yaw – the three enemies of accurate application. A combination of springs and shock absorbers, as well as hydraulic cylinders and accumulators all work together to provide the best boom ride possible. The TriTech suspension system has contributed to Goldacres consistently having the best boom ride when measured against competitor machines.

Hydraulic yaw
1. Two opposing hydraulic cylinders are mechanically connected together either side of the pivoting boom centre section. As the centre yaws, one cylinder is retracted, the other is extended. This results in oil movement which compresses in a nitrogen-charged accumulator. The result is precise boom yaw control.

Roll
2. Delta links – The key to the superior boom ride is the strategically placed delta links. In all, there are four links. Each link features spherical ball ends which allow the centre to move in all directions.
3. Roll centre point – The roll centre point is the location at which the boom pivots around, both in roll & yaw.
4. Roll dampeners – Reduces high-frequency oscillation of the boom roll.

3D Breakaway
The end breakaway section protects the boom from stress damage if a ground, fence or tree strike occurs. The end section can break forwards, backwards and upwards. The spring mechanism uses an eccentric mounted sprocket and chain to provide maximum breakout force in the neutral position, then reduces the force the further the breakout.

Boom height control
The system will keep the boom at an entered preset height, allowing chemicals to be applied in an optimum spray pattern maximizing your inputs through consistent application and reduced spray drift.

Bi-fold
Spray with a boom folded into a narrower width when conditions are not suited to a wide boom.

Wing Tilt
Handle undulating terrain with ease by adjusting the left or right wing with individual hydraulic tilt. This feature allows the wings to be raised or lowed to clear obstacles and maintain a consistent spray height

RapidFire
Over the last several years there has been a greater shift to precision farming technologies, such as auto steering and automatic boom section control. Both of these technologies are aimed at reducing spray overlaps and unsprayed areas, the former potentially causing crop burning and overuse of chemical. Depending on the field size and shape the wastage can be quite substantial.
Goldacres have developed these practices further by introducing RapidFire air controlled nozzle shut off capability.

Traditional systems use motorised boom section valves to control water flow to the nozzles. Wider booms in conjunction with increased number of spray sections means a substantial amount of plumbing is required, thus increasing the delay in spray on and off times. In addition, the further the nozzle is from the centre of the boom the longer the delay becomes. RapidFire overcomes these problems by putting the switching capability right at the nozzle.

Small airlines at each nozzle switch the flow on and off in a fraction of a second, and more evenly across the boom width. Boom line plumbing is also greatly reduced, which quickens line priming and flushing as well as simplifies plumbing.

RapidFlow (Boom Recirculation)
RapidFlow – Boom Recirculation allows the sprayer boom lines to be fully primed from the driver’s seat without spraying a single drop. This reduces wastage at the start of a tank load or when switching chemicals. RapidFlow can also be used to thoroughly flush out the boom lines without the need to physically spray on the ground.

3TS (Three Tier System)
The spray nozzles operating pressure range and size determine the application rate and speed band at which the driver must adhere to. This band is usually quite narrow. To overcome this Goldacres offer a 3 tier system (3TS) which effectively gives the driver a much wider operating band whilst still maintaining optimum droplet size. Think of 3TS as a three-step gearbox. Each nozzle type has an operating pressure band for a given droplet size. As the first nozzle reaches the top of the pressure band it switches off and the next larger size nozzle switches on. When that nozzle reaches the top of that pressure band the first nozzle will switch on again, effectively giving three operating bands.

3TS Pro
The 3TS – Pro is our 3TS system with an extra nozzle added to give a total of 3 nozzles. This allows seven nozzle combinations to be used, which offers many flow rates and speed variations without manually changing the nozzles.
3 different nozzle sizes working on a tiered system can give the operator virtually any flow rate and desired speed range. 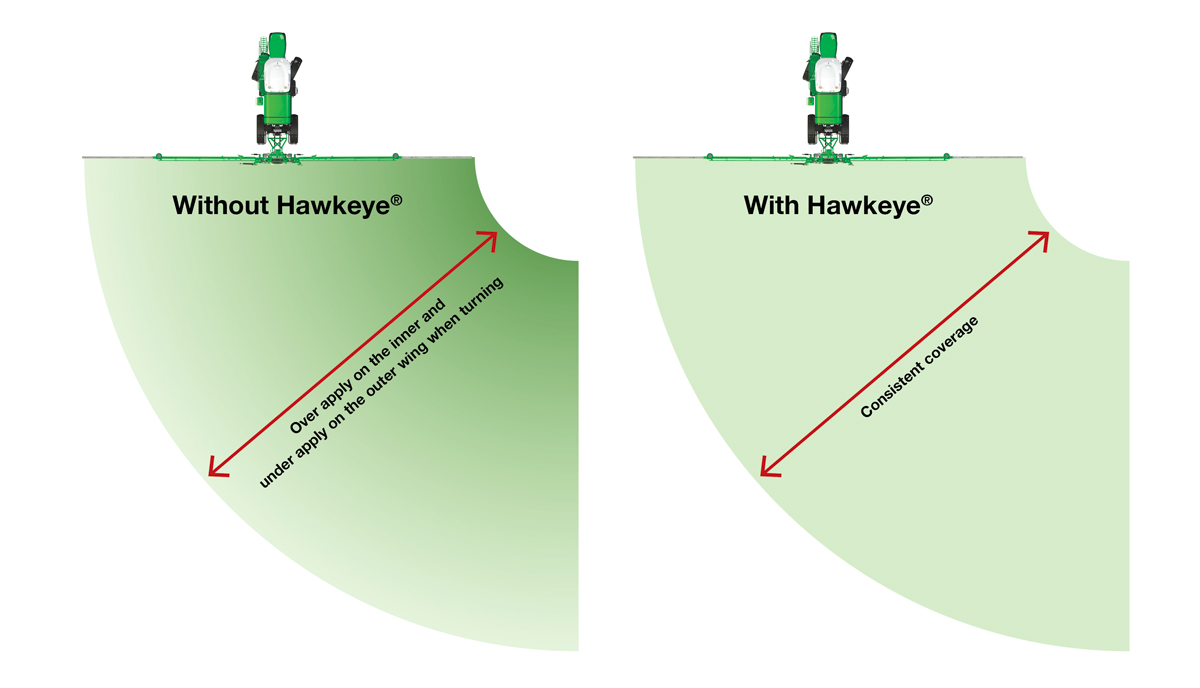 Raven Hawkeye® HD nozzle control
The Hawkeye HD Nozzle Control System is a pressure based product control system which allows for precise sprayer application in a variety of conditions, reducing spray drift and getting the most out of every nozzle.

Each nozzle is controlled by its own individual pulsing valve giving you a consistent spray pattern as speed and conditions change.

The Hawkeye System is built on the ISOBUS communication platform which allows it to work with ISO Task Controllers, including the Viper® 4+. Hawkeye has also been tested for shock, vibration, impact, and weather resistance in rugged terrain and extreme temperatures. Its durability is unparalleled.

There are no reviews yet.